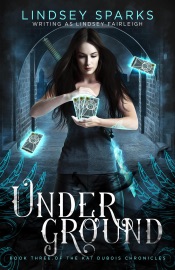 When immortals clash, mortals will pay the ultimate price.

Kat Dubois has been sidelined. With a single word from Heru—no—her plans to save humanity from the Cascade Virus one mortal at a time are put on hold indefinitely. But Kat isn't willing to sit by, watching the world as she knows it crumble around her. While Heru awaits a miracle discovery that may never come, Kat shuns his orders and takes rogue action. Thanks to her trusty deck of tarot cards, she knows that at least the universe is on her side. Probably.

Alongside Nik, Kat throws herself into her work, intending to transform humans into immortal Nejerets as quickly as possible. She refuses to give up, even as her partner in humanitarian crime seems to be losing his grip on reality. Even as she, herself, senses that she's fighting a losing battle. Even as the universe reveals its truly duplicitous nature and the way onward seems impossible.

Kat is nothing, if not stubborn. She won't give up. Not without a fight.

Underground is the third book in the Kat Dubois Chronicles, a tough-girl urban fantasy series set in Seattle, WA. If you like intense action, gritty characters, unconventional magic, and Egyptian mythology, then you'll love this unique, fast-paced adventure!

MORE BOOKS IN THE ECHO WORLD: