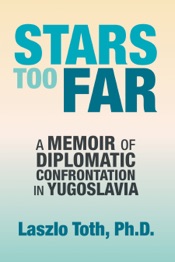 In1975, Lazslo Toth, a US citizen and then director of technical research at the Great Western Sugar Company in Colorado, was visiting his native country of Yugoslavia to work on its continuing technical cooperation with other European nations. As part of this effort, he had agreed to provide photographs of a Yugoslav sugar plant. During this visit to his hometown of Vrbas, Toth was shocked to find himself arrested by the Yugoslav State Security, charged with spying as a CIA agent, tried in a kangaroo court, and sentenced to seven years in the notorious maximum-security prison Sremska Mitrovica. Stars Too Far describes his harrowing experiences and how the ensuing struggle for his freedom, involving such key figures as President Gerald Ford and Foreign Secretary Henry Kissinger, led to one of the lowest points in relations between the American and the Yugoslav governments since World War II. The story of his rescue and eventual release from behind the Iron Curtain provides new insight and unprecedented access into one of the fiercest diplomatic clashes between Tito’s communist Yugoslavia and the Ford administration.